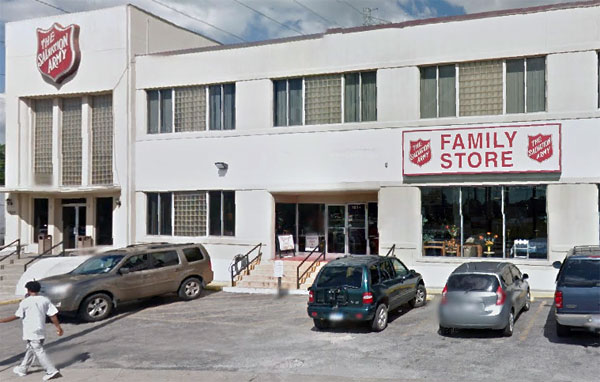 The Salvation Army Thrift Store and shelter at 1324 S. Flores. The charity is making a public relations push to dispel the claims that it is anti-LGBT.

The Salvation Army, a Methodist global ministry and the second largest charity in the U.S., is pushing back against accusations that it is homophobic despite what many consider to be a poor record on LGBT rights.

With Christmas just around the corner, the charity is making a public relations push to dispel the claims that it is anti-LGBT.

“The Salvation Army embraces employees of many different faiths and orientations. Our hiring practices are open to all, and we adhere to all relevant employment laws, providing domestic partner benefits accordingly,” reads a website posting under the headline “The Salvation Army and the LGBT Community.”

For many LGBT activists, the charity’s recanting does not forgive it’s past transgressions. A December 2013 article in Fortune magazine lists some of the Salvation Army’s anti-LGBT history as compiled by the now-defunct website NoRedKettles.com:

The site compiles many isolated incidents that have given the Salvation Army so much grief from the gay community for the past 20 years: the closure of homeless outreach programs in San Francisco in 1998 in retaliation for a city requirement to provide benefits to same-sex partners; a similar threat in New York City in 2004; and a failed attempt in 2001 to lobby the Bush administration to exempt religious charities from local laws banning discrimination. But the most egregious moment came this past June (2012) when a spokesperson for the Salvation Army in Australia went on the radio to suggest that gays deserve to be put to death.

In one incident that made news in Texas this past March, the Salvation Army denied shelter to a homeless transgender woman in Dallas because she had not yet had gender reassignment surgery.

Some in the LGBT community welcome the Salvation Army’s re-thinking of past policies.

“I think it does say a lot about the momentum that’s been built for equality,” Grant Stancliff of Equality Ohio told the Columbus Dispatch. “For organizations that have this kind of perception following them, it can affect the bottom line.”

“While anger and hurt on the part of the LGBT community are justified, it’s also important to recognize change and good deeds,” Stancliff told the Dispatch.

In a post on the Blue Nation Review, columnist John Paul Brammer writes:

The Salvation Army is also asking for help in debunking these accusations of homophobia, because it diminishes their resources and ability to help people.

Well, since they’re asking for my two cents, here’s my take on whether or not the Salvation Army is homophobic: It’s complicated.

On the one hand, it’s hard to deny that the Salvation Army, uber-religious though they might be, has done good . . . On the other hand, though, if the Salvation Army really wants to prove they aren’t homophobic, then that’s great. Fantastic.

The deposing of witnesses in the nondiscrimination case of a transgender man who says he was unjustly fired from AT&T...