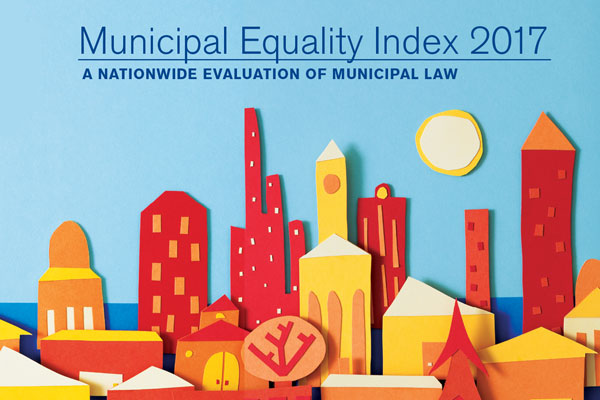 The City of San Antonio maintained its ranking in the Human Rights Campaign’s 2017 Municipal Equality Index.

Now in it’s sixth year, the 2017 MEI scores 506 cities based on 44 criteria including nondiscrimination laws, the municipality as an employer, municipal services, law enforcement and the city leadership’s public position on equality.

“This year’s Municipal Equality Index paints a vivid picture: cities big and small, in red and blue states alike, are continuing our progress toward full equality, regardless of the political drama unfolding in Washington, D.C. and in state legislatures across the country,” HRC President Chad Griffin, writes in the introduction to the report. Like last year, San Antonio was docked points because the city’s nondiscrimination ordinance protects LGBT employees who work for the city and for city contractors but does not include citywide employment nondiscrimination protections.

In a recent interview with Out In SA, Mayor Ron Nirenberg addressed the issue of citywide employment nondiscrimination saying, “. . . I think it will have to be studied in terms of what the city can do with the existing legal framework of employment law. As a matter of values, I can say confidently our city will seek to have as strong non-discrimination protections as can exist locally under the law.” Points were also lost because the city does not require contractors to have transgender inclusive healthcare benefits and because it does not have a human rights commission. However, several bonus points were awarded for services the city provides to LGBT youth and homeless, to the trans community, and to people with HIV/AIDS.

Following is the list of Texas cities scored in HRC’s 2017 Municipal Equality Index.

Updated: October 19, 2017 4:00 p.m. This article was updated to include replies from Beasley Automotive and from Mr. Rudkin's...