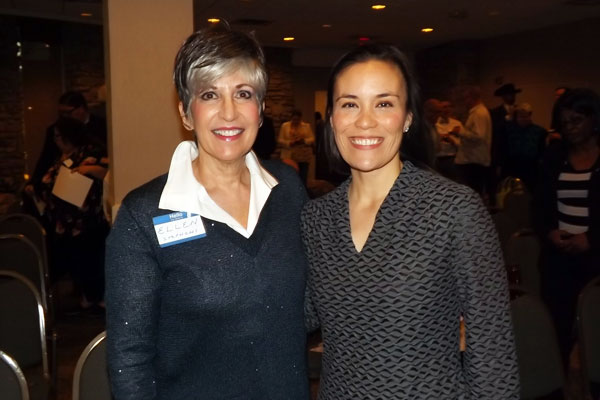 After listening to almost 70 candidates speak over the course of over four hours on Sunday, January 28, the Stonewall Democrats of San Antonio have released their full list of endorsements for the March 6 primary.

The conference room at the El Tropicano Hotel, where the candidate forum was held, was filled to near-capacity with political hopefuls, media representatives, interested observers and Stonewall members who would, at the end of the day, vote on the endorsements. Ahead of the event, Stonewall had already released a list of 16 “friendly incumbent endorsements” of candidates who are running for re-election and who are proven LGBT allies. This list included Congressmen Joaquin Castro and Lloyd Doggett; State Reps. Diego Bernal and Justin Rodriguez; County Judge Nelson Wolff; and County Commissioner Tommy Calvert.

In order to be eligible for a Stonewall endorsement, candidates had to complete a questionnaire and speak at the forum or send a representative to speak for them.

Candidates were given two minutes to speak and two minutes to answer questions. Despite efforts to keep the agenda on schedule, speakers often went into overtime making for a long day of political discourse. One of the most interesting aspects of the Stonewall endorsements are the incumbents who were not endorsed. Challengers were given the nod in the races for District Attorney, County Commissioner Pct. 2, and Bexar County Democratic Party Chair.

Of the two LGBT candidates running for Governor of Texas, Stonewall gave their endorsement to former Dallas County Sheriff Lupe Valdez over Dallas businessman Jeffrey Payne. Rosie Gonzalez, the only LGBT candidate running for a local judgeship (County Court-at-Law No. 13), was also endorsed.

In two races, State Representative District 116 and District Judge 226th Judicial District, Stonewall did not endorse one candidate but offered a “favorable” notation to two candidates who they felt were equally worthy of consideration.

The last day to register to vote in the March 6 primary is February 5. Early voting begins on February 20 and ends on March 2. Check out the Bexar County elections website for more information.

(Check out our Facebook album with more photos of this event.)

Commissioner of Agriculture
No Endorsement

Member, State Board of Education, District 3
Marisa B. Perez

Judge, County Court-at-Law No. 2
No Endorsement

Judge, County Court-at-Law No. 5
No Endorsement

Judge, County Court-at-Law No. 8
No Endorsement

More LGBTQ Texans than ever are running for office, magazine says