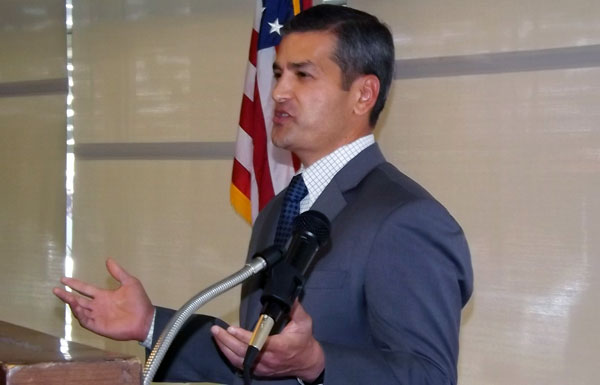 The Stonewall Democrats of San Antonio endorsed former state Rep. Mike Villarreal for Mayor of San Antonio during a vote at their candidate forum on March 22.

According to sources who attended the closed-door caucus during which the endorsements were voted on, Villarreal got a majority of the votes. Former state Senator Leticia Van de Putte came in second.

One source told Out In SA that it was Van de Putte’s response to one of the questions on the candidate questionnaire that led many to support Villarreal.

The question asked if the candidate supported a city-wide employment nondiscrimination ordinance. Van de Putte answered “no” and qualified that answer by saying that the city must focus on its “primary mission,” going on to say that “the power of the pocket book” would ferret out businesses that discriminate.

For this election, City Council members Rey Saldana (District 4), Shirley Gonzales (District 5), Ray Lopez (District 6) and Ron Nirenberg  (District 8) had already received the Stonewall board’s “friendly incumbent endorsement” that exempted them from submitting a questionnaire or having to appear at the meeting.

Councilwoman Gonzales stopped by the meeting with her new baby and gave some brief comments. She said that regarding the NDO, she’s “here to serve.” She also told Out In SA that even though many believe that Mayor Ivy Taylor’s plans for a Department of Diversity and Inclusion have come too late in her term, it’s still possible that Taylor could get the vote to the City Council before the term expires.

Councilman Nirenberg showed up near the conclusion of the meeting to thank Stonewall for its endorsement.

In District 1 Peter Kurzon was endorsed, primarily because he was the only candidate to show up. Incumbent Councilman Roberto C. Trevino did not respond to Stonewall’s request for a completed candidate questionnaire.

Perhaps the biggest surprise of the day was that all three candidates for District 2, Mayor Ivy Taylor’s former district, endorsed the nondiscrimination ordinance. The Stonewall endorsement was given to former Interim City Councilman Keith A. Toney. However, both Antonio “Tony” Diaz and incumbent Councilman Alan E. Warrick, II, said they stood for equality.

Toney gave an impassioned speech in support of the ordinance and Warrick said it was a shame that the topic of equality still has to be discussed in forums “like this” when there were so many other important topics that needed to be addressed.

In District 7, Enrique Valdivia was given the nod. Incumbent City Councilman Cris Medina was a no-show.

One councilwoman who did show up was Rebecca Viagran of District 3. However, even though she voted for the nondiscrimination ordinance, the Stonewall membership rejected her based on her part in the Mission Trails evictions and her position on the Uber and Lyft ride sharing controversy. Stonewall members voted to not make any endorsement in Viagran’s district.

No endorsements were made in Districts 9 or 10.

In the San Antonio Independent School District board race, out candidate Scott Meltzer (District 6) got the endorsement.

Check out our Facebook Album for more photos of this event.

LGBT parents and the pressure to be perfect

If we fail, do we let the LGBT community down and prove our opponents’ beliefs true? It happened again. We...