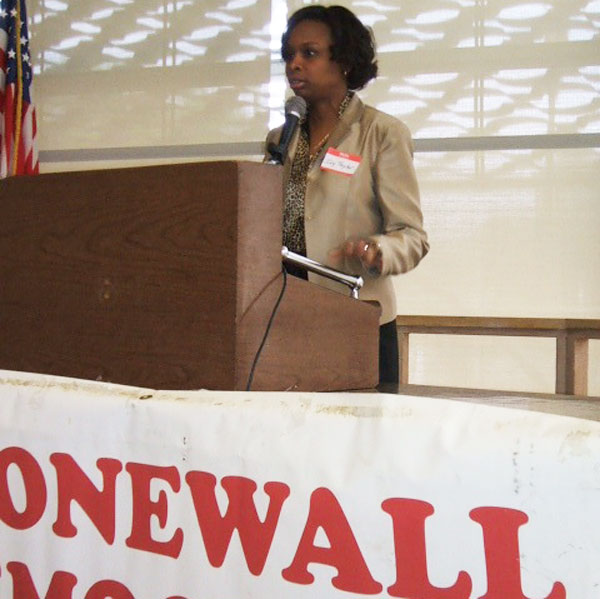 Ivy Taylor at the 2011 Stonewall Democrats' candidate endorsement forum. Stonewall organizers say they have not received a completed questionnaire or a commitment from Taylor as to whether she will attend this year's forum slated for March 22. (Photo by Sam Sanchez)

With less than 48 hours before the event, it appears that Interim Mayor Ivy Taylor will not be attending the Stonewall Democrats of San Antonio’s candidate endorsement forum slated for Sunday, March 22.

Mark Porter, chairman of Stonewall’s endorsement committee, confirmed to Out In SA that of the four major candidates for mayor, Taylor is the only one who has not submitted a completed candidate questionnaire or confirmed her attendance.

Out In SA contacted Taylor’s campaign by email and telephone on Thursday, March 19, but received no reply to messages asking whether she would participate.

Were Taylor to appear at the forum, it would be the first time she would face LGBT constituents since she voted against the nondiscrimination ordinance.

In 2011 and 2013, Taylor sought the endorsement of the Stonewall Democrats but did not get it.

After the 2011 endorsement meeting, the San Antonio Current wrote: “Perhaps what was most surprising about the day’s discussion was that a sitting council member like Ivy Taylor would expose herself as being so uncomfortable about LGBT issues. In response to a candidate’s survey, Taylor said that if she were endorsed by Stonewall she would not carry that endorsement on her website or campaign literature. ‘Many in our area would look at that as something that would be divisive,’ Taylor told the group.”

Later that year, Taylor’s “no” vote on the NDO was made all the more controversial by the comments she made at the time. “I have sacrificed a lot to serve in this role on city council, but I will not sacrifice my core values and beliefs for political gain or to be in alignment with a particular platform. And if that was the expectation for me as a black woman, you’ve got the wrong sister in this seat.” Taylor said.

In June of 2014, LGBT leaders expressed their concern when local media reported that then-Councilwoman Taylor was the frontrunner for the post of interim mayor replacing Mayor Julian Castro who was to leave San Antonio to take a position as President Obama’s HUD secretary.

“I don’t think she’s representative of this entire city,” former CAUSA co-chair and then-Stonewall endorsement committee chair Dan Graney told the San Antonio Express News. “She doesn’t support equality for LGBT people, and it’s very bothersome. I don’t think she should spend one day in the mayor’s office because of it.” One month later the City Council appointed Taylor interim mayor.

Taylor tried to patch up her relationship with the LGBT community but made no attempt to walk-back any of the comments she expressed during the NDO fight.

In September of 2014, Taylor appointed activist Marsha Warren as the LGBT liaison to her office and in a much-heralded announcement, the new interim mayor said she was assembling an LGBT advisory committee to help her correct the NDO’s shortcomings.

Nearly seven months later, after being pressed by Out In SA for a response, Taylor sent out a press release saying she would be appointing a human relations liaison who will handle complaints made under the city’s nondiscrimination ordinance and head up a proposed Department of Diversity and Inclusion.

“With City Council approval, at the mid-year budget adjustment, this position will serve as a perfect complement to our fully-functional website that focuses on receiving and processing written complaints.  The proposed Office of Diversity and Inclusion focuses on promoting the value that diverse populations bring to our community, including promoting contracting and employment opportunities within the City,” Taylor said in the press release.

The response to Taylor’s announcement in the LGBT community was tepid at best. Some complained that it was too little too late considering that Taylor’s proposal would still have to face a vote of approval by the City Council in order to get the funding needed for salaries and the operation of a new city department.

The community’s skepticism regarding Taylor was not helped when last January she told the San Antonio Current, “I think people nowadays expect political correctness, and that is very frustrating to me.”

Earlier this month, Taylor further alienated LGBT citizens when she failed to add her name to the 225 U.S. mayors, including six from Texas, who signed an amicus brief urging the Supreme Court to strike down states’ laws against marriage equality.

When asked why Taylor did not sign the brief, Leilah Powell, the mayor’s chief of policy, told Out In SA, “The Mayor is strongly focused on issues of municipal governance.”

It is still possible that Taylor might attend the Stonewall forum. Some candidates wait until the last minute, show up with a completed questionnaire in hand and make it onto the dais. However, in Taylor’s case, no one is holding their breath.

Stonewall Democrats of San Antonio Candidate Forum and Endorsement Meeting, March 22 at 1:00 p.m. in the Fiesta Room of Luby’s Cafeteria, 911 N. Main Avenue. The meeting is open to all but only Stonewall members may vote on endorsements.

The Color of Blind exhibition takes over Brick