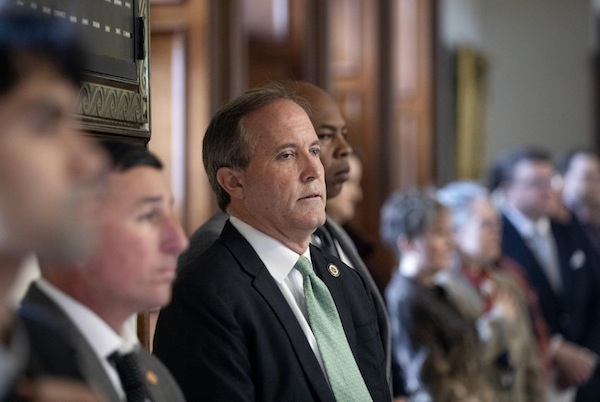 Texas Attorney General Ken Paxton, who has made religious liberty a top priority of his office, criticized the California statute as an unconstitutional and misguided attempt to police other states. (Photo: Miguel Gutierrez Jr./The Texas Tribune)

Texas Attorney General Ken Paxton asked the U.S. Supreme Court on Monday to strike down a 2016 California law that bans state-funded travel to states with discriminatory laws — a list Texas landed on nearly three years ago after the Legislature approved a religious-refusal law for adoptions in the state.

Paxton, who has made religious liberty a top priority of his office, criticized the California statute as an unconstitutional and misguided attempt to police other states.

“California is attempting to punish Texans for respecting the right of conscience for foster care and adoption providers,” he said.

Paxton’s action this week is the latest salvo in a long-running rivalry between the country’s largest Republican and Democratic strongholds. California and Texas routinely find themselves at odds in the federal courts, including recently in a case Paxton filed to strike down the Affordable Care Act.

It’s also a reprise of Paxton’s role as one of the state’s chief culture warriors. In five years as attorney general, Paxton has elevated his views on religious liberty to the state’s official legal maneuvers. He challenged in court Obama-era rules on health care for transgender people and refused to defend a state law that allows doctors to make end-of-life decisions for brain-dead patients. His office will not defend a state agency being sued for punishing a Waco judge who refuses to marry same-sex couples because of her religious beliefs. And he made serious hay over a decision by the San Antonio City Council to exclude Chick-fil-A — whose leaders oppose same-sex marriage — from the city’s airport.

The law that prompted California to list Texas as discriminatory, authored by state Rep. James Frank, R-Wichita Falls, allows faith-based organizations to deny services for certain contraceptives and refuse to contract with organizations that don’t share their religious beliefs. It requires providers to refer parents or children to a different agency if they refuse to provide services themselves.

California has banned travel to 11 states. One of them, Oklahoma, retaliated last month with its own ban on state-funded travel to California.

Becerra’s office did not immediately return a request for comment.

A transgender student at Grand Prairie Fine Arts Academy in Texas received an 18th birthday surprise from fellow students who...