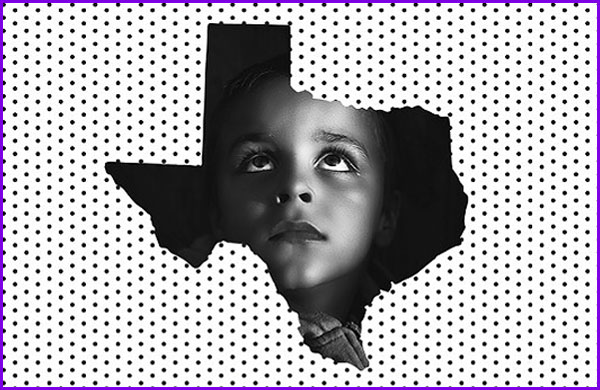 Earlier this year, the Texas Department of Family and Protective Services quietly removed and significantly altered anti-discrimination language from a document informing foster kids of their constitutional rights.

Called the Foster Care Bill of Rights, this document is required by the state to be read to any child placed in DFPS’s care. It’s meant to help children better understand their situation, and how they can expect to be treated as wards of the state — including the guarantee to be free from abuse, neglect, exploitation, discrimination, harassment, and the right to food, clothing, shelter, health care and education.

But after a few tweaks in February, children entering foster care might be less clear on what their rights actually are. Before, the document promised kids “fair treatment whatever [their] gender, gender identity, race, ethnicity, religion, national origin, disability, medical problems or sexual orientation.” That’s since been erased and replaced with the vague promise that foster kids will “be treated fairly” and “have their religious needs met.”

These changes, while they might seem subtle, are concerning for at least some foster care advocates.

“Foster kids don’t need to have any more of their rights stripped away,” said Elaine Hartle of the local youth advocacy non-profit THRU Project. “A lot of them are in foster care because they’ve been rejected by their families for being different.”

To be clear, according to DFPS officials, no actual rights have been taken away due to the change of language. “The foster care bill of right does not create any new rights,” said DFPS spokesperson Patrick Crimmins. “If it’s not read to kids, it doesn’t change the fact that those rights exist.”

Crimmins said in an interview with the Current that somebody in the department changed the language at some unknown point to align more closely with the minimum standards listed in a “legal document.” He said he didn’t know who actually made this change.

According to Crimmins, there’s no official rule for how the bill of rights should be delivered, nor any designated minimum age. “I don’t know if they’re ever read,” he said. “Sometimes the caseworker talks to them, depending on the circumstance.”

Yet the law passed in 2011 clearly states that “each kid in foster care” must be “informed of the of the child’s rights provided by state or federal law.” The law also outlines that it must be delivered “orally” and in “non-technical terms” and that the department must provide a written copy of it in the child’s primary language. And, according to the print-out version of the bill of rights provided online by DFPS, children must be provided a copy within 72 hours from the date they come into care, and again, when a placement change is made.

Hartle said that the changes made to the bill of rights were upsetting. “Most of these kids have been through many homes—sometimes up to 40—and many of them say that they’ve been forced to go to church,” said Hartle. “They need to know that they are not required to go.”

The bill’s February changes, which went largely unnoticed at the time, were followed shortly by the state legislature’s introduction of House Bill 3859, a law that would sanction discrimination against LGBTQ foster parents. Under the bill, religious-based child-welfare providers would be allowed to turn away same-sex couples and families with certain religious views. HB 3859 passed both chambers before the end of session, and only needs Gov. Abbott’s signature before becoming law.

State Representative Ina Minjarez gave the  Current this statement in response to recent changes made to the Foster Care Bill of Rights:

“It is unfortunate that several specific examples of fair treatment was removed from the Foster Care Bill of Rights. However, after the division we saw this legislative session, it is not surprising. Democrats fought all session with amendments to add more protections and it is regrettable that some of our state leaders believe less protections for our most vulnerable and more liability protections for the providers are the way to go.”

Roald Dahl's 1988 children's novel Matilda is much like his 1966 novel, Willy Wonka and the Choclate Factory, in that...