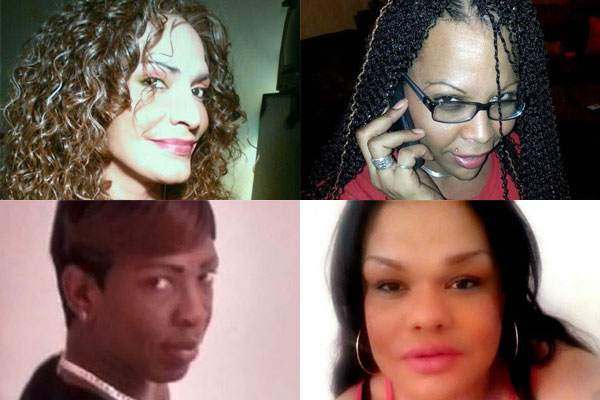 The Transgender Day of Remembrance honors the memory of transgender people who were murdered or died from violence. Trans women who have have been victims in 2016 include Monica Lorera from North Austin, Veronica Banks Cano of San Antonio, Shante Thompson of Houston and Erykah Tijerina of El Paso. (Courtesy photos)

The Metropolitan Community Church of San Antonio will once again play host to the annual Transgender Day of Remembrance observance on November 17.  The day honors the memory of those who have died as a result of anti-transgender prejudice.

According to GLAAD, “Transgender Day of Remembrance is observed in late November in recognition of the 1998 murder of Rita Hester. Rita was a highly visible member of the transgender community in her native Boston, MA where she worked locally on education around transgender issues. On Saturday, Nov. 28, Rita was stabbed 20 times in her apartment. A neighbor called the police, and Rita was rushed to the hospital. She passed away from cardiac arrest only moments after being admitted.”

In a June 16 article, the New York Times reported, “A look at four years of homicides of LGBT people catalogued by the National Coalition of Anti-Violence Programs shows that the vast majority of those who were killed were black or Hispanic transgender people.”

The Human Rights Campaign published a study, Addressing Anti-Transgender Violence, which says that in 2015, 21 transgender people died due to “fatal violence.” The number is the highest ever recorded.

“Transgender women of color are facing an epidemic of violence that occurs at the intersections of racism, sexism and transphobia – issues that advocates can no longer afford to address separately,” Chad Griffin, the president of the Human Rights Campaign, said in the study.

In 2016, at least 20 transgender people already have been fatally shot, stabbed or killed by violent means. This year’s list of deaths includes four transgender women from Texas.

“Right now we’re experiencing a Dickensian time, where it’s the best of times and it’s the worst of times at once,” Masen Davis, who formerly ran the Transgender Law Center, told Time Magazine. “We’re seeing a marked increase in the public awareness about transgender people and really incredible progress for trans rights, especially from a legal perspective. At the same time, we still represent and are part of a community that experiences incredibly high rates of unemployment, poverty and violence.”

This year’s observance incorporates a Memory Walk sponsored by Pride Center San Antonio during which university and community groups will stage a candlelight march from San Antonio College to MCC and then release purple lanterns, representing transgender victims, before entering the sanctuary.

San Antonio observes the Transgender Day of Remembrance, November 17, 2016. Memory Walk from San Antonio College (Myrtle and Main behind Subway) to MCC San Antonio (611 E. Myrtle) steps off at 6 p.m. For more info about the Memory Walk call 210-370-7743. Service at the church follows from 7 p.m. to 9 p.m. Light refreshments will be served. For more information about the service call 210-472-3597.