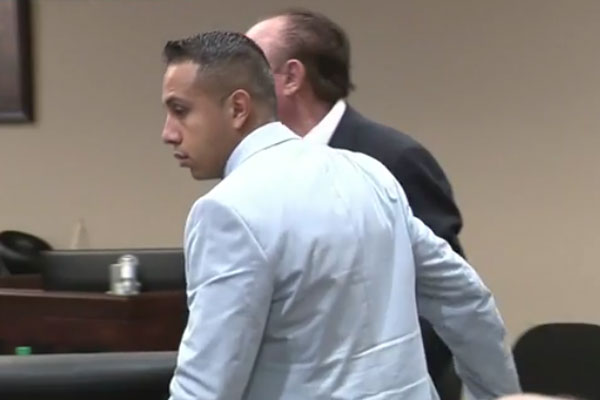 David Asa Villarreal enters court where he is being tried for the murder of Aaron Estrada. (Video capture)

The trial of a 32-year-old San Antonio man accused of murdering his boyfriend in October 2015 began on Tuesday, June 19 in the 186th state District Court, presided by Judge Jefferson Moore.

David Asa Villarreal, who has pleaded not guilty, allegedly murdered his boyfriend, 29-year-old Aaron Estrada, by stabbing him to death in their apartment in the 12000 block of West Avenue during a heated argument while the two were on drugs.

According to police, Villarreal left the scene and fled to Austin where he was arrested days later.

The Bexar County Medical Examiner’s Office ruled Estrada’s death a homicide saying he died from sharp-force injury. The victim was stabbed seven times in the throat and head, and had defensive wounds on his hands. A pair of bloody scissors and a broken knife were found at the scene of the crime. 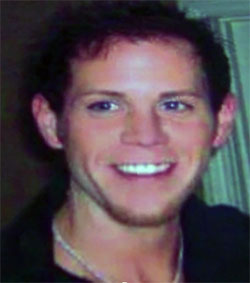 In his opening statement, defense attorney Alex Scharff said the two men were in a close relationship in which Estrada would supply Villarreal with drugs.

According to Scharff, the two men were fighting over a closed circuit camera system that Estrada had installed throughout their apartment, a move which Villarreal opposed. The argument escalated when Villarreal tried to cut off power to the system and thought he heard Estrada retrieving a weapon from his gun safe. Villarreal grabbed a knife and the two men began to scuffle.

Scharff said Villarreal was acting in self-defense. “He didn’t want to be in some kind of drug-fueled battle for his life, but that’s basically what happened,” Schraff told the court.

The prosecuting attorney, Kimberly Gonzalez, told the jury that after the murder, Villarreal went to see a friend who says Villarreal was “freaking out” and saying, “I did it, I did it.”

Villarreal faces a sentence of up to life in prison if he is found guilty of Estrada’s murder.

After nearly a year of planning and fundraising, a rainbow crosswalk is set to be installed early next week on...