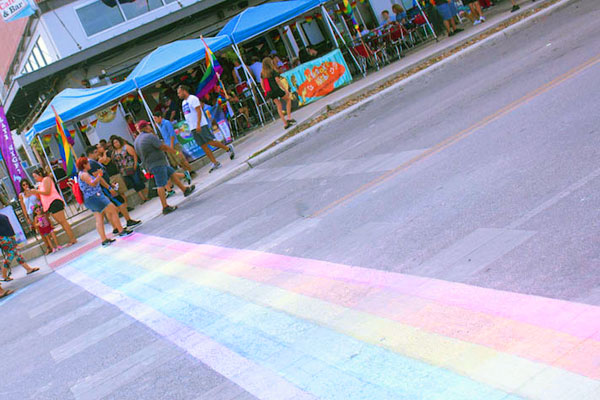 After nearly a year of planning and fundraising, a rainbow crosswalk is set to be installed early next week on the corner of Evergreen and North Main Avenue, just in time for an unveiling party on June 29 and the Pride Bigger Than Texas Parade the following day.

According to an email to Out In SA from City Councilman Roberto C. Treviño’s office, the city’s Transportation and Capital Improvements department is set to receive the needed materials by the end of this week. If all goes as planned, the installation will follow early next week over the course of two nights.

The price tag for the crosswalk is $32,500, with the LGBT community and allies having raised over half the money needed for the installation.

The high cost of the crosswalk is due to the system the city will use to create the stripes. Instead of paint, the process employs a durable system that is heat transferred on to the asphalt. This assures the colors will not fade as fast as normal paint thus requiring less maintenance.

The idea for the crosswalk originated last year after a group of LGBT volunteers painted a rainbow crosswalk in chalk on the day of the Pride San Antonio festival and parade. Shortly afterward, Councilman Treviño submitted a Council Consideration Request which the City’s Council’s Governance Committee approved as a pilot program to create the rainbow crosswalk with the proviso that the community had to pay for half the cost.

Some of the money for the crosswalk was raised by selling Fiesta medals designed by Treviño as well as with assistance and donations from the community.

Some of those credited with helping the project reach its goal include Randy Cuniff of Texas Heat Investments who owns four businesses on the Main Avenue Strip, LGBT businessman Paul Boskind, local gay business owner Chris Forbrich, the Alamo Area Resource Center, PFLAG SA and Tito’s Vodka, among others.

On June 7, the San Antonio City Council voted unanimously to accept $19,832 in donations from the LGBT community and its allies to help defray the cost of installing the crosswalk.

For Treviño, who has championed the project from the start, the rainbow crosswalk reflects a continued engagement with the LGBT community.

In the Facebook announcement for the unveiling party the councilman says, “Join us and our generous supporters as we unveil and celebrate the newly installed rainbow crosswalk on N. Main and Evergreen! BYOI: Bring Your Own Ideas for what we can focus on next to promote inclusiveness and compassion in the center city and across San Antonio.”