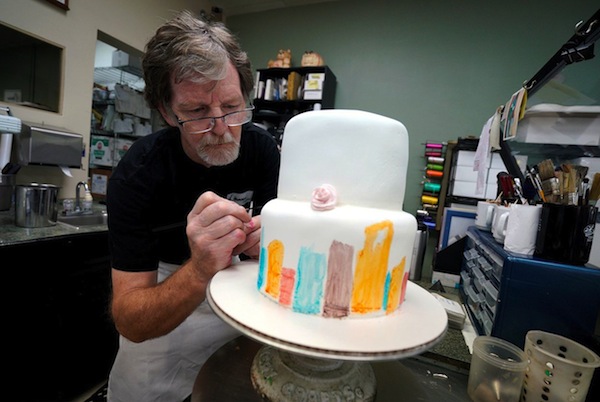 After the high court ruled Monday in favor of a Christian baker in Colorado who refused to make a wedding cake for a gay couple, conservatives praised it as a vindication of religious liberty and free speech. Meanwhile, LGBT advocates focused on language in the decision that suggests future cases could be decided differently.

At the center of the case was the question of “religious refusals” — whether, and when, a “sincerely held religious belief” justifies denying certain people certain services or privileges. The baker, Jack Phillips, sought what LGBT advocates have characterized as a “constitutional right to discriminate,” saying that he should not be forced to “use the talents that I have to create an artistic expression that violates [my] faith.”

In a 7-2 holding Monday, the high court declined to identify that right, ruling instead on narrower legal grounds specific to Phillips’ case. Writing for the majority, Justice Anthony Kennedy said Phillips had been unfairly treated by the Colorado Civil Rights Commission at an earlier stage of the lawsuit. Other religious refusal cases, Kennedy wrote, “must await further elaboration in the courts.”

The Supreme Court also held that “it is a general rule that [religious and philosophical objections] do not allow business owners and other actors in the economy and in society to deny protected persons equal access to goods and services under a neutral and generally applicable public accommodations law.” Lawyers for the baker had argued that the baker’s work was protected as an expression of his art.

This case doesn’t have direct bearing on similar statewide issues in Texas. But here are five Texas takeaways:

Both sides are claiming some victories from the ruling. That includes several prominent Texas Republicans. U.S. Sen. Ted Cruz said the court “took a stand for religious liberty against the unconstitutional demands of an oppressive bureaucracy.” Texas Attorney General Ken Paxton said “this is a landmark victory for our first liberties of religious freedom and freedom of speech.” Both had led more than a dozen federal lawmakers and attorneys general, respectively, in friend-of-the-court briefs on behalf of the baker.

Still, experts and LGBT advocates pointed out that the court left open the larger question of religious refusals, and held out hope that future cases on the issue would come out in their favor.

“It’s a victory for equality that the court did not create this constitutional right to discriminate,” said Rebecca Robertson, chief program officer for Equality Texas. “Justice Kennedy said in no uncertain terms that the underlying question has yet to be resolved. And so I think we are going to see another case like this at the Supreme Court.”

The legal basis for religious refusals is very different in Texas and Colorado. The Colorado couple sued the baker under the state’s public accommodation law, a statewide anti-discrimination statute. But Texas is one of just five states that has no such law — meaning a couple in a similar situation here would not have had a state law to protect them.

But some Texas cities have anti-discrimination ordinances along the same lines. Cities like Austin, Dallas and San Antonio have some explicit protections in place for LGBT residents — and those were broadly upheld in Monday’s ruling, experts said.

“One implication of this decision is for the general validity of those acts,” said Lawrence Sager, a constitutional theorist at the University of Texas Law School. “The principle says that there is nothing approaching a general right of religious believers to disobey those municipal laws.”

When it comes to those local ordinances, though, LGBT individuals’ “remedy is fairly limited,” Robertson said. Those local rules are important, she said, but do not carry the force that a state law would.

“Texas does not have — and should have — comprehensive statewide protections,” said Jennifer Pizer, a Lambda Legal attorney who worked on the organization’s friend-of-the-court brief. “This decision underscores why those laws are important and why the Texas Legislature should pass those laws.”

Certain measures — like a bill by state Rep. Eric Johnson, D-Dallas, that would have explicitly protected LGBTQ employees from workplace discrimination — come up every session, but rarely gain much traction.

“I don’t think you can be too gay to buy a cake,” the congressman wrote on Twitter. “Let’s end this discrimination. Let’s pass the Equality Act. Let’s ensure equal justice under law for LGBTQ Americans.”

Advocates also worry that this ruling could bolster Texas lawmakers who champion “religious refusal” laws to file more in 2019. The Texas Legislature considered a slew of religious refusal laws in 2017 — by an ACLU count, lawmakers weighed 17 bills that would have would have discriminated against LGBT individuals in the name of religious freedom. Perhaps the most noteworthy of those bills was House Bill 3859, a measure that allows religious welfare providers to deny adoptions and other services to LGBT people. That law prompted California to block state-funded travel to Texas.

While the court didn’t issue a blanket protection for religious refusals, Monday’s decision will only empower lawmakers who favor such measures to file more in the future, Robertson said. That would follow a pattern she said emerged after the high court ruled in the landmark Obergefell case that same-sex couples have the right to marry. After that decision, she said, there was a backlash of discriminatory measures from Texas lawmakers.

“People who advance those arguments are going to take this case as support and justification [for religious refusals],” Robertson said. “When there is a really clear [pro-LGBT] ruling from the Supreme Court, the Texas Legislature comes back and tries to think of ways to legislate around that ruling, or legislate in a way that ignores the ruling.”

Disclosure: Rebecca Roberston, Equality Texas and the University of Texas at Austin have been financial supporters of The Texas Tribune, a nonprofit, nonpartisan news organization that is funded in part by donations from members, foundations and corporate sponsors. Financial supporters play no role in the Tribune’s journalism. Find a complete list of them here.

LezRideSA announced this week that is accepting applications from local LGBT youth organizations for two $500 LezFund Grants it will...