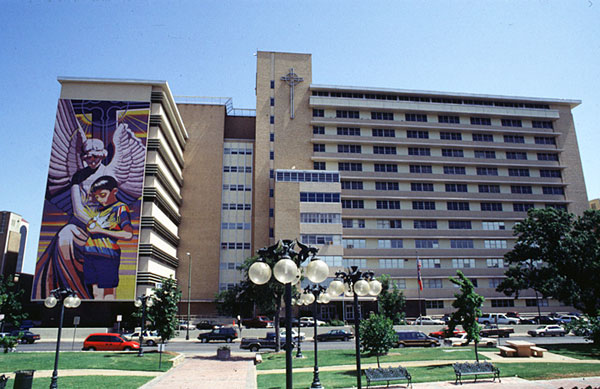 The former Christus Santa Rosa hospital is being converted into the Children's Hospital of San Antonio. This week Christus Health announced it would extend benefits to employees who are legally married to a same-sex spouse. (Courtesy photo)

The Christus Health system announced this week that it will now offer employee benefits to same-sex couples who are legally married.

Last summer before the Supreme Court ruled on marriage equality, Jordan Roberts, a Christus employee working at a hospital in Beaumont, Texas, found he could not add his new husband to his health insurance plan. “They told me that Christus was a Catholic organization and did not recognize same sex marriages and that I was not allowed to add him,” Roberts told Fox4 Beaumont at the time.

A Christus spokesperson told Fox4 that Roberts could have added his husband to his insurance plan through a “one plus” benefit plan that was available to all employees in domestic partnerships. But Roberts was not happy with that solution. “That’s not a spouse, that’s like a child,” he told Fox4.

When Roberts’ complaint came to light in the media, Christus released a statement saying:

We do not anticipate that the Supreme Court’s ruling that states cannot keep same-sex couples from marrying and must recognize their unions will change anything for Christus Health Southeast Texas. As a Catholic health care provider, we understand that the dignity of human life flows from creation in the image of God and is of inestimable worth and inalienable dignity. In that spirit, we have been honored to care for and work with people of many different religions, creeds, and perspectives. We will continue that commitment by honoring the dignity in each and every person we serve, employ, and interact with.

As it turns out, Roberts could not add his spouse as a “plus one” because since they were married, they did not qualify as “legally domiciled dependents” and therefore could not get coverage. So Roberts sued.

“This is, as far as we know, the first faith-based, large scale employer to do this after the Supreme Court’s decision. We’re hopeful that other faith-based employers are going to follow suit, without legal action,” Kaplan told WOAI.

“I want to end the torture and abuse of all incarcerated transgender people.” A chief technology officer for a health-care...