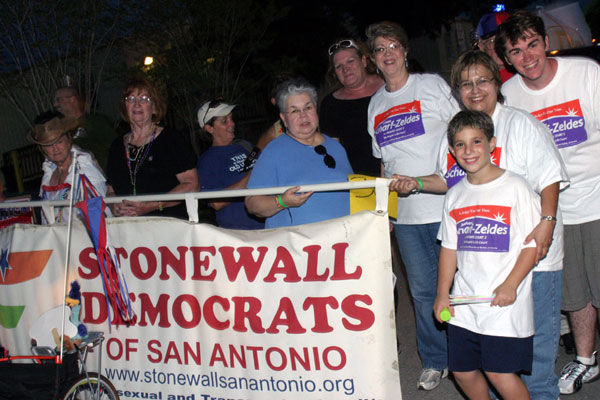 Members of the Stonewall Democrats of San Antonio wait to march in the 2010 Pride San Antonio Parade. (Photos by Sam Sanchez)

The banquet room at Luby’s Cafeteria was filled to capacity on January 24 when the Stonewall Democrats of San Antonio held their candidate endorsement forum ahead of the March primary.

The place was packed with politicians and their handlers, media, Stonewall members and others from the community who wanted to get a close-up look at the over 50 Democratic candidates who came seeking an endorsement. The vitality on display that day stands in contrast to a meeting held a week prior, on January 18, at which Stonewall’s leadership told its members the organization was in crisis. The main problem: Due to resignations and term limits, Stonewall had no treasurer or secretary which meant it did not have a functioning board of directors.

More troubling was that Vincent Enriquez and Carolee Moore, Stonewall’s co-chairs, could find no members who wanted to run for the open positions. “It is imperative that all members attend the January 18 General Membership Meeting,” the co-chairs had written in an email to members. “The future of the organization is in your hands.” Luckily, by the time the meeting ended, Chris Forbrich, a businessman and former Stonewall board member, came forward and volunteered to take the treasurer’s position. Political activists Ruby Krebs and Dee Villarubia were elected directors at large.

Most recently, Robert Vargas III, the founding editor of the now-defunct Ignite Magazine, was appointed board secretary. The group still has a variety of committee chairs which remain unfilled.

For the past decade, the Stonewall Democrats have been a vibrant force within the local Democratic Party and in the LGBT community. In the years between 2006 and 2010, Stonewall meetings, which have always been open to the public, were standing-room-only events. For many in the community it was at those meetings where you could shake the hand of the police chief, the city manager, state and national politicians and members of the city council who were regularly invited to address the membership.

At the height of its popularity Stonewall had nearly 200 dues-paying  members. Today, that number has been reduced by more than half with an average meeting often attracting fewer than 40 people. Five years ago, the average age of a Stonewall member was 60, today that average is 65. Many who volunteered in the past have slowed down.

Faced with a dwindling and aging membership, Enriquez and Moore were prompted to ask Stonewall members what they see for the future of the organization. To that end, those present at the January 18 meeting voted to send members a short questionnaire. The survey was mailed to 88 members, 37 replied.

The first survey question addresses an idea that has been floating for a while among some Stonewall members: Given that the Texas Democratic Party has incorporated LGBT issues into its platform, isn’t it time for Stonewall to become a non-partisan organization thereby permitting the group to reach out to politicians from other parties?

Another question asks what members like best about the organization. The endorsement forum came in at the top of the list.

“I think perhaps our most significant success and contribution to the community is that Stonewall Democrats of San Antonio is the only LGBT organization in all of Bexar County that screens and endorses candidates running for public office, all the way from President of the United States at the top of the ballot to Constable at the bottom of the ballot,” says longtime member Dan Graney. “To me, the candidate screening and endorsement process is the engine that really drives the organization.”

Following is the text of the survey questions and the results.

Question 1
Do you support Stonewall Democrats of San Antonio becoming a non-partisan political action committee by the name of Stonewall LGBT Caucus?
Yes: 10 — No: 23 — No Reply: 4

Question 2
Stonewall has recently had trouble recruiting enthusiastic members to serve in leadership positions or on committees. Some members question if stonewall is still necessary. Do you support closing Stonewall Democrats of San Antonio?
Yes: 2 — No: 30 — No Reply: 5

Question 3
Please choose any of the following activities which would provide you with the best value for your membership.

Question 4
Please tell us other plans, feeling or suggestions you have and would like included in the survey results.

“We had a vigorous discussion at our March 21 meeting where we reviewed the results of the questionnaire,” Moore told Out In SA. “Stonewall was re-affirmed by the responding members who prefer it to remain a Democratic organization rather than become non-partisan at this time.”

One proposal that Stonewall’s leadership received was a suggestion to regularly followup with elected officials who were endorsed by the group, to see if they are making good on their promises.

However, Moore says more member participation is needed. “To do this, we need an active membership who could make individual or small group visits to our elected officials, here or in Austin. This would be a great opportunity, especially for our younger LGBTQ community, to be involved and actively shape policy.” Moore adds that Stonewall is now in the midst of a “reassessment process,” seeking ideas for more efficient ways to carry out the group’s mission. She’s especially keen to encourage younger community members to join Stonewall.

“Personally, I hope our Stonewall members will feel affirmed that they have been traveling the right path, even when it gets exhausting and folks are feeling discouraged by low turnout at regular member meetings,” says Moore. “All one has to do is turn on the tube, pick up the paper or read the online news to know our fight is not over and we must continue to hold our own party accountable.”

The Stonewall Democrats of San Antonio meet every third Monday of the month at 6:30 p.m. in the Fiesta Room at Luby’s Cafeteria, 911 N. Main. Meetings are open to the public. The next meeting is April 18.

Check out our slide show from the January 24 Stonewall Democrats of San Antonio candidate endorsement forum.

Wesley Salazar Gets the Wheels Turning

The doors close, the lights go out, the music starts pumping and an assembled crowd start to move and sweat...