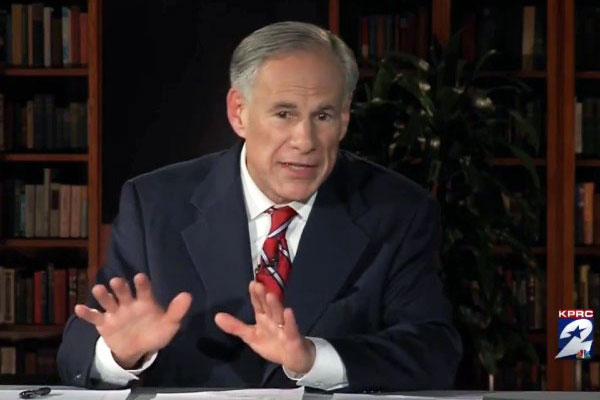 During the first and only gubernatorial debate with his opponent, former Dallas County Sheriff Lupe Valdez, Texas Governor Greg Abbott said passing a bathroom bill was “not on my agenda,” marking a change from the position he held during the last session of the state legislature.

Valdez, the first openly LGBT major party candidate for governor in the history of Texas, and Abbott debated on September 28 in Austin at the LBJ Presidential Library on the University of Texas campus.

The passage of a bathroom bill, which would have restricted the use of certain public restrooms and locker rooms by transgender Texans, dominated the debate for most of 2017.

In April of last year, Abbott supported the passage of such a bill and issued a statement saying, “I applaud the House and Senate for tackling an issue that is of growing concern to parents and communities across Texas who are now looking to the Legislature for solutions.”

Abbott went on to say the bill was “a thoughtful proposal to make sure our children maintain privacy in our school bathrooms and locker rooms. As the debate on this issue continues, I will work with the House and Senate to ensure we find a solution and ultimately get a bill to my desk that I will sign into law.”

Despite the fervor of Texas Republicans, the bill was widely opposed by the business community, tourism officials, law enforcement officials, religious leaders and the LGBTQ community. When the legislature failed to pass the bill in the regular session, an attempt was made to pass it during a special session but it failed there as well.

By spring of this year, State Rep. Byron Cook (R-Corsicana) the chairman of the House State Affairs committee, was busy obfuscating the governor’s original position, telling the media Abbott “did not want that bill on his desk.”

A report from the House Select Committee on Economic Competitiveness appeared to put the nail in the coffin, saying, “Texas policymakers must acknowledge warnings from leaders in the business community, academicians and law enforcement officials about the consequences of such discriminatory legislation to avoid endangering the state’s successful economy.”

The governor’s flip-flop on the issue is in direct opposition to conservative groups who say the fight over bathrooms and same sex marriage is not over. Earlier this month, at a forum sponsored by Texas Values, an ultra-conservative advocacy group, several Republican politicians declared the issues still needed to be addressed. State Rep. Matt Krause, (R-Fort Worth) told the gathering it was time to protect people and businesses who had deeply-held religious beliefs.

At the debate, Valdez said a bathroom bill would address a nonexistent problem and encourage discrimination against transgender people. “There is a continual fear-mongering, and I don’t believe in laws that start out in fear,” she said.

Last month, Bexar County Sheriff Javier Salazar unveiled his Community and Internal Liaison Program in which he appointed liaisons to...