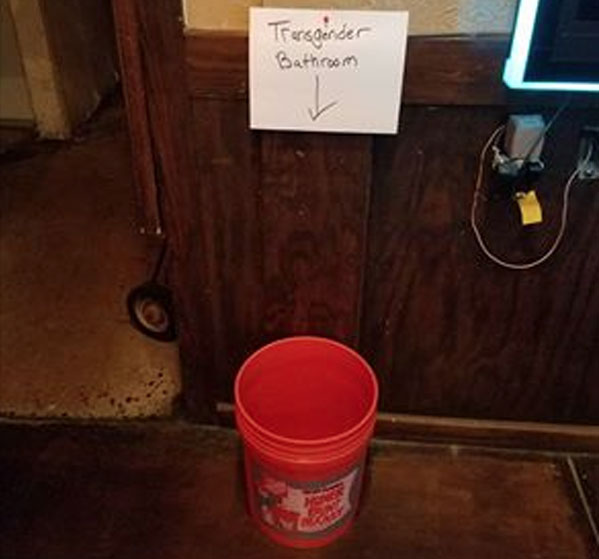 A local bartender took this photo at his place of business and posted it on his Facebook page.

A bartender at a local sports bar posted a picture on his Facebook page of a bucket with a sign thumbtacked above it that reads, “transgender bathroom.” Above the photo he suggested the bar is mindful of “social issues.”

The photo, which started circulating on Facebook at around 11 p.m. on May 17, was posted by Brett Speer, a bartender at Mitchell’s Sports Bar, which is located at 1923 Lockhill Selma in San Antonio. Speer posted the picture on his Facebook page with the caption “Mitchell’s cares about social issues. #trump2016” The photo was taken inside Mitchell’s next to the jukebox near the men’s restroom.

Out In SA learned about the photo from a reader who sent an email saying, “I am gay and have been to this bar many times and have never felt unwelcome, but there are a series of new younger bartenders and the atmosphere is starting to frighten me.”

Out In SA contacted the management of Mitchell’s via email to ask for a comment on the photo. The magazine received an unsigned response which read:

“We are completely unaware of the Facebook photo that you explain below. Obviously it is insensitive, against policy, and does not reflect the views of Mitchell’s Sports Bar. The use of our trade name, Mitchell’s, was not authorized appears to have been posted on a private page.”

“We’re sad to hear about this incident,” said Lou Weaver, the Transgender Programs coordinator for Equality Texas. “We hope that the local business takes time to reach out to the local transgender community and get to know them. We also look forward to working with them if they choose to learn more about the issues facing the LGBT community.”

Speer has since removed the photo from his Facebook page. However, he left behind a post in which he writes, “I want to open a bar and have midget waiters and call it ‘the mini bar.'”

I meet House of Kenzo (HOK) on the University of the Incarnate Word Sky Bridge, a phobia-tweaking pedestrian catwalk over...