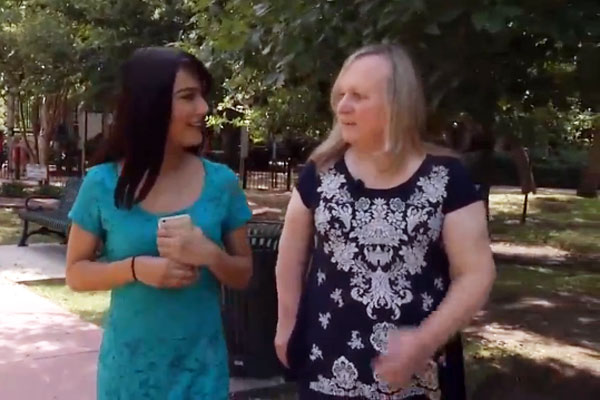 Catizia Farris and her mother, Lauryn, spoke to KABB-TV about the transgender restroom controversy. (Video capture via KABB)

A San Antonio trans teenager is sharing her story of being bullied by classmates when, because of school policy, she had to use the boy’s restroom.

In an interview with KABB-TV, Catizia Izzy Farris said, “People would throw water bottles at me they would push me into the stall. They would cuss at me a lot and that’s when I started thinking I should not be in this restroom if I feel like people are going to hurt me.”

Catizia recalls thinking she should have been allowed to use the girl’s restroom and couldn’t reason why school officials would not let her do so. “I just went through a lot of stuff with that,” she told KABB.

Catizia spent years in the foster care system after she ran away from her family because they would not accept her. In 2015, she was adopted by Lauryn and Kerry Farris. Since then, she has blossomed. With the help of her adoptive family, Catizia has started hormone therapy and had her birth certificate reissued with her corrected name and gender markers.

“This is who I am fulltime, I’m a girl. This is exactly what trans people look like. It was right when I got adopted that I felt like nobody could tell me who I am anymore. I’m Catizia Farris,” the teen told KABB.

Lauryn, who is also transgender, and her adopted daughter are speaking out because of the negative reaction by social conservatives to allowing trans people to use public restrooms that match their gender identities.

The restroom controversy has dominated headlines across the nation. In a report for Out In SA, blogger Marco Aquino explains, “As the debate over which public bathroom transgender people should be allowed to use continues, one thing has become increasingly clear: The people arguing against such rights have little to zero knowledge of what it means to be transgender. From politicians to television sports analysts, many have weighed in with poorly informed opinions.”

Catizia and Lauryn say they are speaking out because the issue is personal and affects them daily. By stepping forward, the mother and daughter help put a human face on the lives of transgender people.

“She loves to talk about it. She loves to be an activist, she believes everyone should be treated equally,” Lauryn explained to KABB reporter Renee Santos. “All we want to do is go in and use the restroom and be left alone just like everyone else.”

In her television interview, Catzia says trans people are a part of all our lives. “It takes a lot of education. We are your family members, your friends, your coworkers, we are just like anybody else.”

‘Motown the Musical’ Set to Dazzle at the Majestic

Motown the Musical tells the story of Berry Gordy and the founding of Motown Records, his wildly successful independent record label that forever changed the...