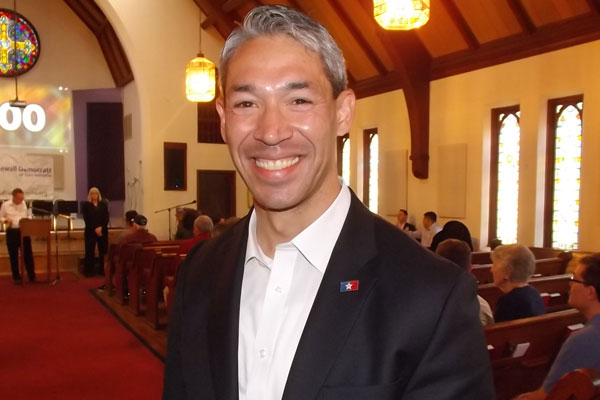 The Stonewall Democrats of San Antonio endorsed City Councilman Ron Nirenberg for mayor at their candidate endorsement forum on March 26. Endorsements were also made in all 10 City Council districts.

To be eligible for an endorsement, candidates had to fill out a questionnaire and appear at the forum to make a short presentation and answer questions from Stonewall members. Approximately 40 candidates were in attendance. Endorsements were voted on during a members-only closed-door session.

Missing from the event was Mayor Ivy R. Taylor who did not fill out a candidate questionnaire nor did she send a representative from her campaign to speak on her behalf. This is the second time Taylor failed to seek Stonewall’s support.

Medina, who says he’s a strong supporter of LGBT rights, and who endorsed the nondiscrimination ordinance, did not notify Stonewall that he would participate in the forum until he showed up at the event about 45 minutes after it started with his candidate questionnaire in hand.

It appears Stonewall members were leery of Medina who was recently endorsed by the San Antonio Tea Party and who was strongly criticized in the San Antonio Express-News for his questionable management of Democratic Party funds.

Three incumbent council members who filled out questionnaires and spoke at the forum were Rebecca Viagran of District 3, Shirley Gonzales of District 5 and Roberto Trevino of District 1. Of the three only Gonzales received an endorsement.

In the case of District 3, it appears Viagran and one of her opponents Jessica O. Guerrero ended up in a close vote which resulted in neither being endorsed but given a “favorable” rating.

For the District 1 endorsement, Stonewall gave the nod to one of their members, Michael Montaño, despite the fact that Treviño has been a supporter of LGBT equality and is often seen at community events.

Two incumbents who chose not come to the forum and did not complete a questionnaire were District 2 Councilman Alan E. Warrick II and District 7 Councilman Cris Medina.

Incumbent Councilman Rey Saldaña of District 4 was not able to attend the forum but sent his completed questionnaire.

The municipal election is slated for May 6. Early voting begins on April 27 and continues through May 2. Compete election information is available on the City of San Antonio’s website.

Check out our slideshow of the Stonewall candidate forum at this link.

Approximately 40 candidates running for mayor and city council came to the Stonewall Democrats of San Antonio endorsement forum on...