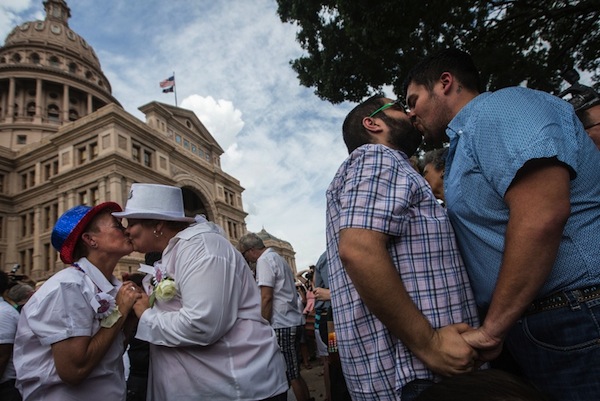 Couples embrace at the conclusion of the "Big Gay Wedding" ceremony on the south lawn of the Texas Capitol on July 4 after the Supreme Court legalized same-sex marriage in June. (Photo: Tamir Kalifa)

The Texas Supreme Court on Friday threw out a lower court ruling that said spouses of gay and lesbian public employees are entitled to government-subsidized same-sex marriage benefits. The state’s highest civil court ordered a trial court to reconsider the case.

As part of a case challenging Houston’s benefits policy, the Supreme Court suggested a landmark ruling legalizing same-sex marriage does not fully address the right to marriage benefits. Justice Jeffrey Boyd, writing on behalf of the court in a 24-page opinion, said there’s still room for state courts to explore the “reach and ramifications” of the U.S. Supreme Court’s 2015 ruling in Obergefell v. Hodges.

“We agree with the Mayor [of Houston] that any effort to resolve whether and the extent to which the Constitution requires states or cities to provide tax-funded benefits to same-sex couples without considering Obergefell would simply be erroneous,” Boyd wrote.“On the other hand, we agree… that the Supreme Court did not address and resolve that specific issue in Obergefell.”

The case was part of Texas Republicans’ ongoing fight against the U.S. Supreme Court ruling that legalized same-sex marriage nationwide and led to the enactment of benefits policies for married same-sex couples.

At the center of the Houston case is whether that ruling — known as Obergefell v. Hodges — requires city and other governmental agencies to extend those taxpayer-subsidized benefits to same-sex spouses of government employees. Following that ruling, public employers in Texas, including state agencies and public universities — quickly extended such benefits.

But in an attempt to re-litigate the high court’s decision, two taxpayers — represented by same-sex marriage opponents — are suing Houston over its policy.

They’ve argued that the interpretation of Obergefell is too broad and that the right to marry does not “entail any particular package of tax benefits, employee fringe benefits or testimonial privileges.” (In a separate case against the state’s now-defunct ban on same-sex marriage, the Texas attorney general’s office actually argued that marriage is a right that comes with benefits the state is entitled to control.)

Lawyers for the city of Houston argued, in part, that opponents are without a legal avenue to even pursue their claims because the city’s policy is protected under Obergefell, which they pointed out explicitly addressed “marriage-related benefits.

During a March hearing, Douglas Alexander, the lawyer who defended Houston’s benefits policy, told the court that the case was moot under Obergefell’s guarantee that all marriages be equally regarded.

Jonathan Mitchell, the former solicitor general for the state and the lawyer representing opponents of the Houston policy, argued that marriage benefits are not a fundamental right and that Obergefell did not resolve questions surrounding such policies.

On Friday, the Texas Supreme Court agreed with that argument, noting that Obergefell requires states to license and recognize same-sex marriages in the same manner as opposite-sex marriages but did not hold that “states must provide the same publicly funded benefits to all married persons.”

That does not mean Houston can “constitutionally deny benefits to its employees’ same-sex spouses,” the court added, but the issue must now be resolved “in light of Obergefell.”

The court also made note of two moves by the U.S. Supreme Court this week as proof that courts are still weighing Obergefell’s impact.

The high court on Monday reversed a ruling by the Arkansas Supreme Court that kept married same-sex couples from being treated the same as opposite-sex couples on their children’s birth certificates. The court also decided to weigh in on whether a Colorado baker can legally refuse to make a wedding cake for a gay couple because of religious objections.

The decision by the Texas Supreme Court to take up the case was regarded as an unusual move because it had previously declined to take it up last year. That allowed the lower court decision to stand.

But the state’s highest civil court reversed course in January after receiving an outpouring of letters opposing the decision. They also faced pressure from Texas GOP leadership — spearheaded by Gov. Greg Abbott, Lt. Gov. Dan Patrick and Texas Attorney General Ken Paxton — who asked the court to clarify that Obergefell does not include a “command” to public employers regarding employee benefits.

That request to the court came more than a year after state agencies moved to extend benefits to spouses of married gay and lesbian employees just days after the high court’s ruling. As of Aug. 31, 584 same-sex spouses had enrolled in insurance plans — including health, dental or life insurance — subsidized by the state, according to a spokeswoman for the Employees Retirement System, which oversees benefits for state employees.

Peppermint, the drag queen and songwriter who recently came in as the runner-up on the ninth season of RuPaul's Drag...