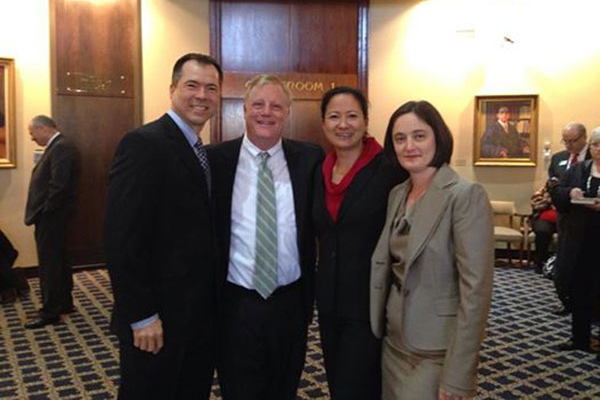 Texas LGBT activists have filed amicus briefs in a case pending before the Texas Supreme Court (Pidgeon v. Harris) where the City of Houston’s ability to provide spousal benefits to married same-sex couples is being challenged.

The case, brought against the City of Houston by anti-LGBT lobbyists Jonathan Saenz and Jared Woodfill, would specifically block same-sex spouses of government employees from receiving any benefits. These opponents think it’s unfair that Texans with anti-LGBT religious beliefs would have to “subsidize same-sex marriage.”

According to the lawsuit, “The primary question before the Supreme Court of the United States in Obergefell was whether or not same-sex couples had a constitutional right to marry. The Court did not create other rights, such as rights to spousal benefits or even the right to live with your spouse.”

Saenz is president of the anti-LGBT group Texas Values and Woodfill is the former Harris County GOP chair.

The Texas Supreme Court initially rejected this case in September 2016 but decided to give it a second chance after being pressured by the state Republican Party. Oral arguments begin on March 1.

On February 27, Jason Steed, a partner with the law firm of Bell Nunnally, filed an amicus brief in Pidgeon v. Harris on behalf of two married couples, Cleopatra DeLeon and Nicole Dimetman, and Vic Holmes and Mark Phariss.

In 2013, the two couples filed a federal suit challenging the Texas ban on same-sex marriages. Their case went on the the Fifth Circuit Court of Appeals in New Orleans where arguments were heard in 2014. The case was still pending when the U.S. Supreme Court ruled on June 26, 2015, in Obergefell v. Hodges that the denial of marriage rights to same-sex couples is unconstitutional.

In a statement that accompanied their brief, the couples said, “It really is unbelievable that full marriage equality is again being challenged in Texas. It is particularly unbelievable because it is being challenged less than two years after the U.S. Supreme Court recognized same-sex couples’ constitutional right to marry. More unbelievable is that Texas’ Governor, Lt. Governor and Attorney General support that challenge . . . ”

An amicus brief was also filed by Equality Texas which said in a press release, “We urge the court to remember that this case could cause real harm to real Texans if the court ignores the landmark Supreme Court decision in Obergefell v Hodges. That marriage case established ― unequivocally ― that the United States Constitution requires inclusion of same-sex married persons within the definition of ‘legal spouses.’ We urge the Texas Supreme Court to do its job and uphold the decision by the highest court in the land and refuse to discriminate against LGBT Texans whose benefits of marriage are protected just like everyone else under the law.”

Artist Wesley Harvey first caught our eye when he appropriated images by Tom of Finland on a set of dinnerware...