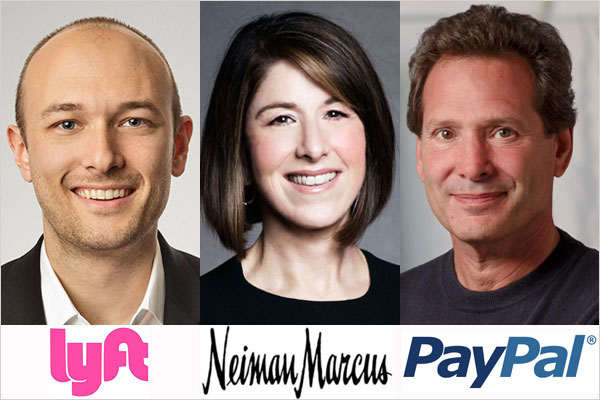 Logan Green, the CEO of Lyft; Karen Katz, CEO of Neiman Marcus; and Daniel Schulman, CEO of PayPal are among 34 corporate CEO's who have spoken out against the proposed Texas bathroom bill. (Courtesy photos)

CEO’s from 10 Fortune 500 companies voiced their opposition to the Texas bathroom bill in a letter which was sent to Texas Gov. Greg Abbott on Thursday, August 3.

“No industry will remain untouched by the unnecessary harm that discriminatory laws will do to our competitiveness, to our ability to attract talent, and to our employees and their families,” the CEOs wrote.

“We support all efforts to maintain a world-class state brand and a strong state economy,” the letter goes on to say. “We know that when Texas thrives economically, our public schools can thrive, our infrastructure can be strengthened and millions of Texas families can see a brighter future for themselves right here in the Lone Star State.”

The letter, which was originated by the Texas Association of Business, included the signatures of executives from PayPal, Frito-Lay, Neiman Marcus, Uber, Lyft and five others. Over the past months, a total of 34 Fortune 500 companies have spoken out against the proposed legislation, among them Apple, American Airlines, IBM and AT&T.

Efforts to oppose the bill also have been organized in San Antonio where tourism agencies and chambers of commerce have gathered almost 40 signatures from local business leaders for a letter sent to Gov. Abbott, Lt. Gov. Dan Patrick and House Speaker Joe Straus. “We believe our economy is stronger when Texas is open for business to everyone,” the letter says.

In testimony before the Senate’s Committee on State Affairs on July 21, San Antonio Mayor Ron Nirenberg said, “This legislation threatens the state’s economy and lives of citizens we all represent because discrimination is as bad for business as it is for the safety of the most vulnerable members of our community.”

The current iteration of the bathroom bill, was passed in the Texas Senate on a 21 to 10 vote after an 8-hour debate on July 25.

Senate Bill 3, which was introduced by state Sen. Lois Kolkhorst, seeks to regulate bathrooms in public schools and government buildings, based on the sex listed on a person’s birth certificate or other forms of state-issued identification. The bill now goes to the House where it faces another vote before passage.

Leo Gomez of Brooks City Base

Janet Holliday of The CE Group

JJ Gorena of The Trey Group

The 23rd annual San Antonio Film Festival will screen Victor's Last Class on August 4 at the Tobin Center for...